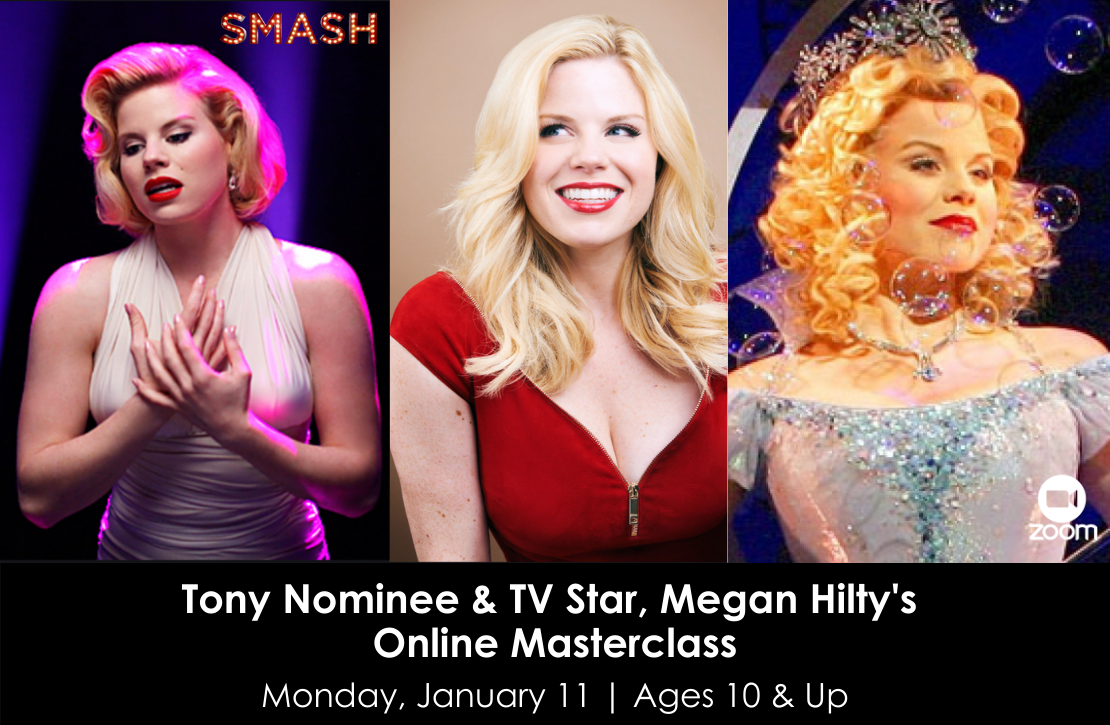 Megan Hilty is a Broadway and TV Star. Notable roles on Broadway include: WICKED, 9 TO 5 (Drama Desk Award Nomination), and NOISES OFF (Tony Award & Drama Desk Award Nomination). Her most notable on-screen role was Ivy Lynn in NBC’s musical drama, SMASH. She has also appeared in subsequent concert performances of the show’s fictitious Broadway hit, BOMBSHELL, in both 2015 and 2020. Other TV roles include: SEAN SAVES THE WORLD (NBC), ROBOT AND MONSTER (Nickelodeon), GIRLFRIENDS’ GUIDE TO DIVORCE (Bravo), and THE GOOD FIGHT (CBS).

SINGERS & NON-SINGERS – ACTOR’S CHOICE: Students participating in this class can choose to perform either a 32 bar cut of a musical theatre song either a cappella or with a backing track (many can be found on YouTube) OR a one minute monologue.

Need a monologue? Email us after registering and we will send you one to perform!

• Receive individual feedback and coaching on your 32-bar cut OR your monologue from Tony Nominee/TV Star, Megan Hilty

• Learn how to interpret a song cut or a monologue

• Learn how to analyze your pieces and break them down into their purest elements with a focus on identifying acting beats, conflict, tactics, and your overall objective

Class will conclude with a super inspiring and informative Q&A!

Participants will need a computer, smartphone, or tablet with a front facing camera. You will be sent an access link that can be used via your browser or the free ZOOM app.