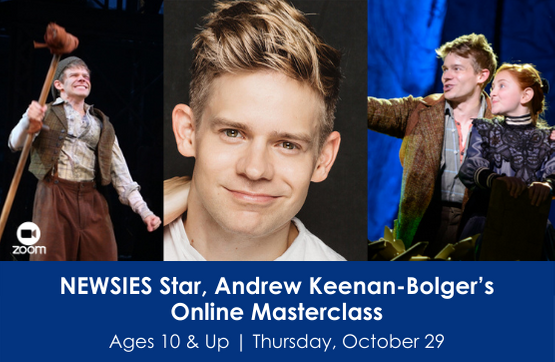 Andrew Keenan-Bolger is a Broadway Star, best known for originating the role of Crutchie in NEWSIES! Other notable Broadway credits include: TUCK EVERLASTING (Original Broadway Cast), MARY POPPINS, SEUSSICAL (Original Broadway Cast), and BEAUTY AND THE BEAST. Andrew also is the co-creator of the web series SUBMISSIONS ONLY. He served as the series Director and Editor during its run from 2010-2014. He has also directed a few short films.

• Learn if your song showcases your unique personality and vocal range
• Learn how to interpret a song and break it down into acting beats
• Q&A with NEWSIES Star, Andrew Keenan-Bolger

Participants will need a computer, smartphone, or tablet with a front facing camera. You will be sent an access link that can be used via your browser or the free ZOOM app.