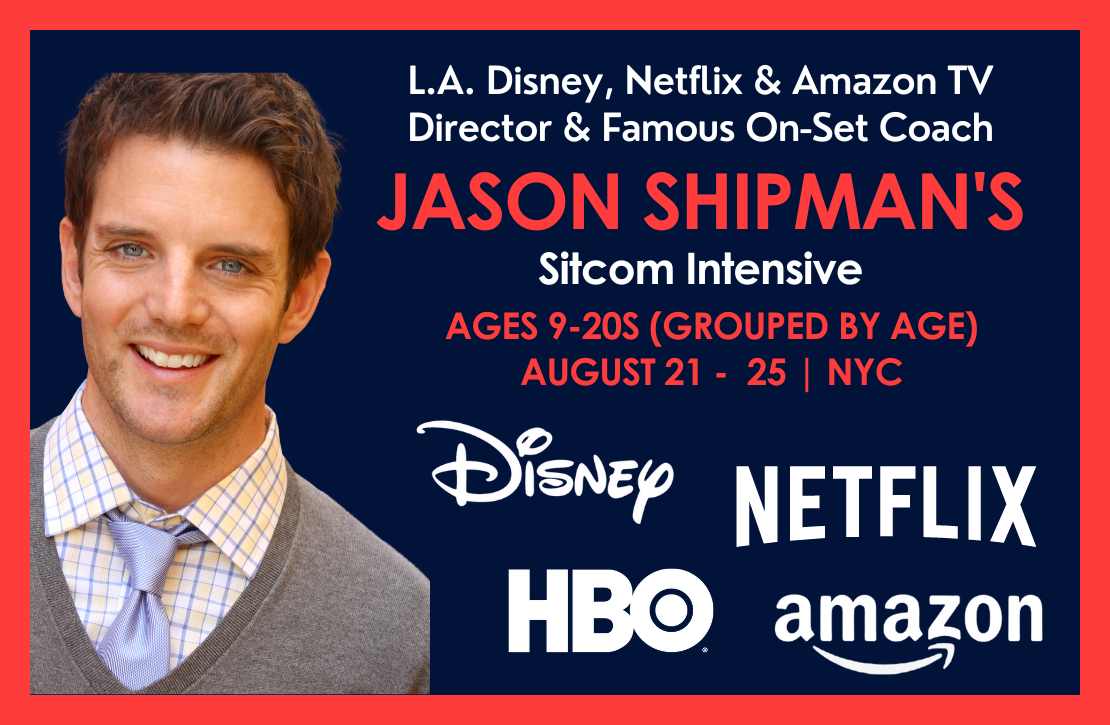 Email us for an age exception!

All of the scenes used for this class are pulled from actual sitcoms!

Live out your dreams of starring on a hit TV series with L.A. Director and famous On-Set Acting Coach, Jason Shipman!

Jason’s credits include a mind blowing number of projects for DISNEY, NETFLIX, AMAZON, HBO, NICKELODEON, APPLE KIDS, SYFY and UNIVERSAL, among others.

He was also brought on to coach episodes of HBO’s WESTWORLD, RESIDENT ALIEN on SyFy, and multiple sitcoms for the DISNEY CHANNEL.

On-Set sitcom coaching credits include BIZAARDVARK, JESSIE, DOG WITH A BLOG, I DIDN’T DO IT, RICHIE RICH, THE FRESH BEAT BAND & more!

Selected by the Directors Guild of America, Jason was admitted to their 2020 Director Development Initiative, where he was identified as an emerging television director to watch.

The week kicks off with a head-first dive into what really defines a sitcom. Students gain a clear understanding of the format, style and schedule. Learn the crucial process of how to dissect a comedy script and prepare for a role. The day ends with each student’s big audition!

A first-hand simulation of what the first day on a sitcom entails. Students participate in a professional Table Read to learn the importance of this event as well as the Network notes that always follow. Undergo a brief Production Meeting for scenes to see the bigger picture of how decisions are made that can affect the material. The day ends with a rough initial blocking on stage – putting scenes ‘on their feet’.

Day 3 is an intensive on blocking and performance of everyone’s scenes. Students get firsthand insight into how much detail goes into every beat and every decision on set. Learn about the rewrite process as well as the value of the Producer and Network Run-Thru.

Students become familiar with the various crew positions that help bring a show together and that directly affect their experience on set. Perform scenes in front of the cameras and receive feedback on various takes.

Actors present their scenes in front of an audience, with the other students playing the roles of the crew. Learn the precision involved in putting on a live show, and gain a full understanding of why the rehearsal week is so vital. The day ends with a Q&A for parents and students.

In addition to working with Jason, Broadway, TV/Film actor, Lauren Elder teaches improv for the camera, scene study and other important skills.