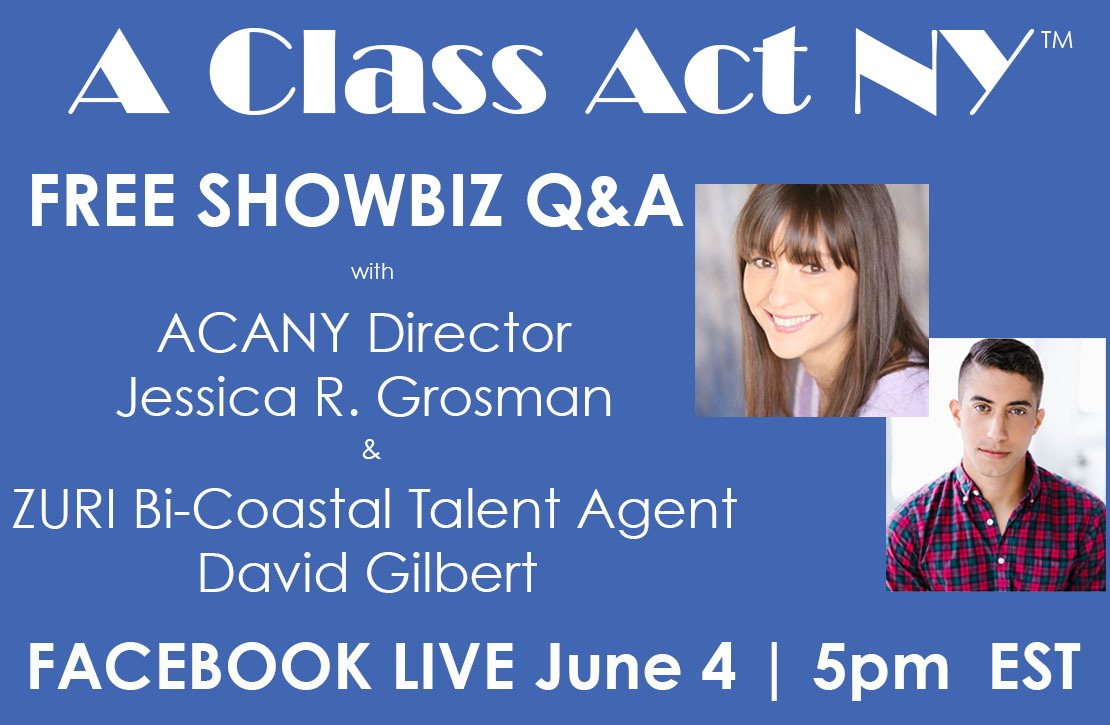 Join us for A Class Act NY’s first ever online seminar featuring David Gilbert, Director of the Young Talent Division of Zuri Model and Talent, and Jessica R. Grosman, the Artistic Director & Founder of A Class Act NY! We’re excited to connect with ACANY families around the world to offer insight into the entertainment industry.

This is a can’t miss opportunity for anyone who is delving into the world of professional acting. Whether you’re the parent of a seasoned actor or brand new to the business, we’ll be providing unique insight into this crazy business. David and Jessica will share the wisdom they’ve gained over decades of developing and guiding the careers of aspiring actors and will answer your burning questions about the biz as well!

David Gilbert is the NY Director of Young Talent at ZURI, a bi-coastal full service talent agency.  David has been representing young performers for the past 5 years.  He originally got his start at a boutique children’s talent agency in New York and later spent time as a talent manager in the youth department at Wilhelmina NY.  His experience includes covering talent for theatrical, commercial, and print work all within the youth market.  His clients appear in a slew of national print & commercial campaigns, on tv series including SMILF, ORANGE IS THE NEW BLACK, LAW & ORDER SVU, KEVIN CAN WAIT, BLUE BLOODS, MOZART IN THE JUNGLE, on the big screen in films like OCEAN’S 8, PRIVATE LIFE, THE WEEK OF and on the Broadway stage. He continues to enjoy developing new talent and working in this exciting industry.

Jessica’s love of the performing arts began at an early age. At the age of 10, Jessica performed on Broadway at the Shubert Theatre in a benefit for famed choreographer, Agnes DeMille. She shared the stage with some of the biggest legends in the business that night, including Tommy Tune and Mikhail Baryshnikov. Jessica continued her studies at the prestigious University of Michigan’s Musical Theatre BFA Conservatory Program. After graduation, she received her Masters in Secondary Education at New York University, where she graduated with high honors. As a Casting Director at Nancy Hayes Casting, Jessica worked on Philip Kaufman’s feature film, TWISTED starring Ashley Judd, Samuel L. Jackson and Andy Garcia, the Indie feature, THE ZODIAC starring Grey’s Anatomy’s, Justin Chambers, Kieran Culkin and Robin Tunney as well as the television series, PRESIDIO MED starring Dana Delany, Christine Baranski, and Blythe Danner and MONK starring Tony Shaloub. While at Nancy Hayes Casting, Jessica worked on countless commercials, voice-overs, industrials, and print ads. Upon her return to NYC, she freelanced with Donna DeSeta, Godlove & Co., Martine Dorfman, Jerry Beaver, Barden Schnee and other casting offices in the city. Jessica also has extensive experience on the talent agency side of the business, having worked for two of New York’s premier talent management firms, Don Buchwald and Associates and the Professional Artists Agency. Jessica was recently featured on the television show, EXTREME MOMS for the Lifetime Channel as an expert talent judge.