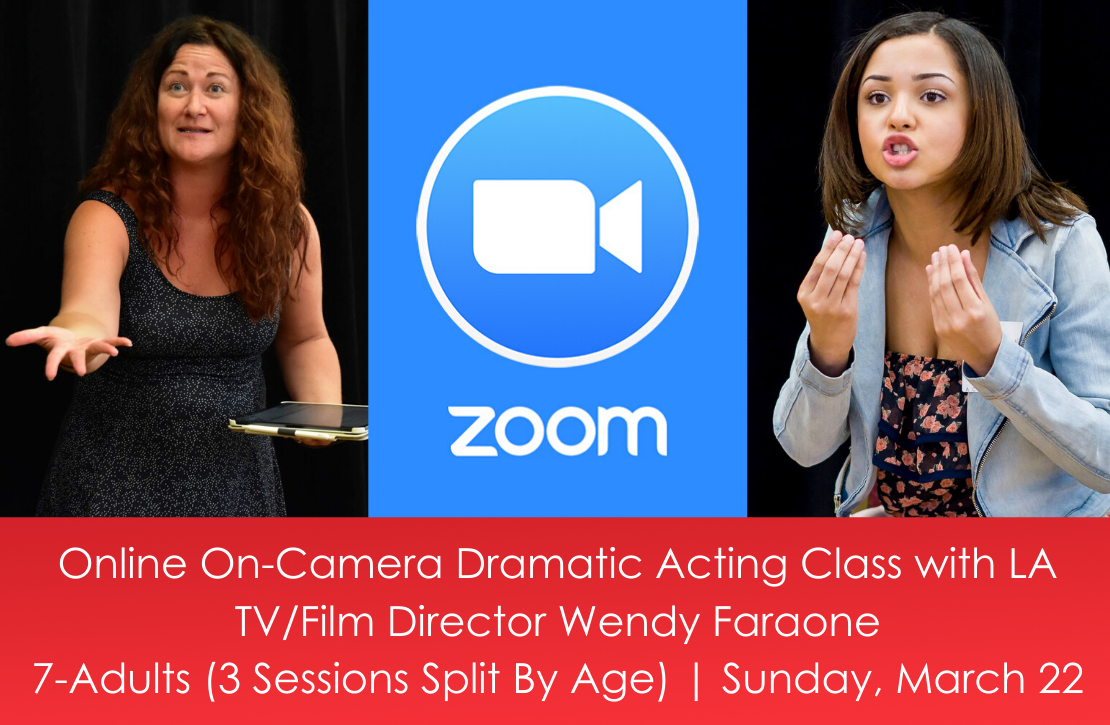 NEW ONLINE WORKSHOP! Take 1 or more sessions with Wendy from the comfort of your own home!

A reader will be hired to work opposite each student!

Wendy Faraone is an influential TV and Film Director whose most well known for her work on the Disney and Nickelodeon channels. If you have studied with Wendy in the past at ACANY, you more than likely learned comedic acting technique for sitcoms.

However, it is imperative that actors also begin to learn dramatic acting technique as well! Wendy states, “Technically all of my shows are hybrids of comedy and drama. Take a look at JUST ROLL WITH IT! There’s a ton of dramatic shots in that show!”

Dramatic acting is much more understated than comedic acting.

Learn the art of dramatic acting from one of the industry’s most in-demand professionals, Wendy Faraone!

Focus of Class:
• Create a believable character for a naturalistic performance
• Develop the tools needed for single camera dramatic acting, such as: playing naturally in your eyes and focusing on subtext, voice and relationship
• Work on grounding and truth-telling
• Showbiz Q&A

Materials will be distributed via email prior to the workshop, and students will be expected to have it accessible during the class.

You will also be sent an access link that can be used via your browser or the free ZOOM app. Participants will need a computer, smartphone, or tablet with a front facing camera.

A BIT ABOUT WENDY:

Wendy is a dynamic and influential director. Her credits include Disney’s JUST ROLL WITH IT, SYDNEY TO THE MAX, WALK THE PRANK, RAVEN’S HOME, KNIGHT SQUAD, COOP AND CAMI ASK THE WORLD and she was also the director of Disney’s #1 family sitcom, LIV AND MADDIE!

Wendy’s goal is to equip actors with the skills, confidence and dedication required to show up on set and be ready to work. Her enthusiasm and energy prepare students for promising and enduring careers!