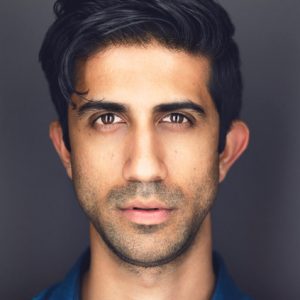 Sathya Sridharan is a New York based actor, writer, and teacher who has worked on screen and stages for the last decade. Most recently, Sathya starred in Minor Premise, directed by Eric Schultz, which screened at the Fantasia Festival and Sitges Festival. Sathya is also know for his work Bikini Moon directed by Milcho Manchevski starring Condola Rashad and Sarah Goldberg, All The Things We Kill, directed by Adam Neutzsky-Wulff, Dastaar (SXSW), Tourists (Nantucket, CAAM, SFAAM),  The Big Ask, and Thirdy. He will also be appearing in Darren Aronofsky’s film The Whale starring Brenden Fraser. Television credits include “Succession” (HBO), “Two Sentence Horror Stories”(CW) “Blindspot” (NBC), “Elementary”, “The Blacklist” (CBS), “Younger” (TVLand). Sathya has worked Off-Broadway at Playwright’s Horizons, the Public Theater, Manhattan Theater Club, and New York Theater Workshop. He is the proud recipient of the Princess Grace Award for Acting (Grace Le Vine Award) and holds an MFA from New York University.