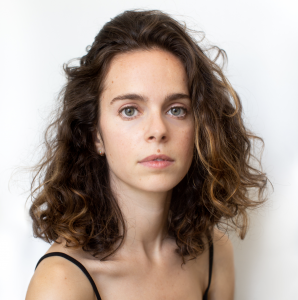 Arielle Goldman is an actor, writer, filmmaker and teaching artist. Her short film DAY ONE was featured in the Nitehawk Shorts Festival, New York Lift Off Festival, The Future of Film is Female and RePRO Film Festival among others. Acting work includes: The Knick directed by Steven Soderbergh, The Marvelous Mrs. Maisel, Shande directed by Bob Balaban, and the upcoming short film Polly directed by Elizabeth Rakhilkina. Arielle co-founded her production company, Neurotica Productions, which serves as a performance breeding ground for works by womxn and non-binary artists. For the theatre: The Seagull dir. Richard Feldman, world premier of Lewiston by Samuel Hunter, Honors Students (Wild Project), Let’s Get Ready Together (The Tank), and more. She holds her MFA from NYU’s Tisch Graduate Acting Program and is a proud volunteer at The 52nd Street Project