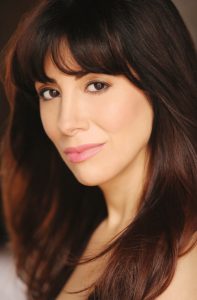 LYN PHILISTINE just finished a successful run of the Off-Broadway show Romeo & Bernadette! Lyn got her Equity card at the age of 8 on a national tour of ANNIE starring Martha Raye and has been performing ever since. Originally from Pittsburgh, she then headed to Cincinnati where she graduated with a BFA from the Cincinnati Conservatory of Music and then moved to NYC where she has lived for over 20 years. Lyn is married to actor Christopher Sutton and they have a 9-year-old son Dylan, and we also just rescued an adorable Shih-Poo named Hero! Some of Lyn’s credits include Broadway/Tours: Monty Python’s Spamalot (Lady of the Lake), directed by Mike Nichols and choreographed by Casey Nicholaw, Gypsy with Bernadette Peters, Cinderella with Eartha Kitt, Disney’s On the Record. NYC/Off-Broadway: A Bronx Tale (Rosina), directed by Robert De Niro and Jerry Zaks, Oliver! (Nancy), My Secret Garden, Golf: The Musical. Regional credits include: Mamma Mia (Donna and Tanya), The Full Monty (Vikki), The Buddy Holly Story (Maria), I Love You, You’re Perfect, Now Change, A Christmas Story (Mother), I DO I DO(Agnes), The Wizard of Oz (Glinda), Annie (Lily), Matilda (Mrs.Wormwood), Jesus Christ Superstar (Mary), A Chorus Line (Cassie.) Soloist for The Philadelphia Orchestra in Bernstein’s Mass conducted by Yannick Nezet-Seguin. Lyn also teaches Voice, with Meditation and Mindfulness to children and adults.