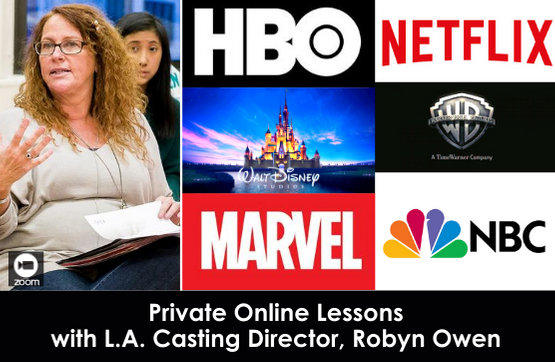 Robyn has also been in the casting department for iconic TV series such as SCRUBS, DAWSON’S CREEK, FELICITY and BUFFY THE VAMPIRE SLAYER, just to name a few!

With years of experience in the industry, Robyn can help you navigate the ins-and-outs of on-camera performance and audition technique!

With Robyn’s help, actors will learn how to give nuanced, subtle performances and create authentic and believable characters.

Robyn specializes in teaching on-camera acting and audition technique and monologue coaching. If choosing to work on a scene or monologue with Robyn and you do not have material, please contact us after registration. Readers will be provided for people working on scenes.

Students will need a computer, smartphone, or tablet with a front-facing camera, and you must download the free ZOOM app to participate!