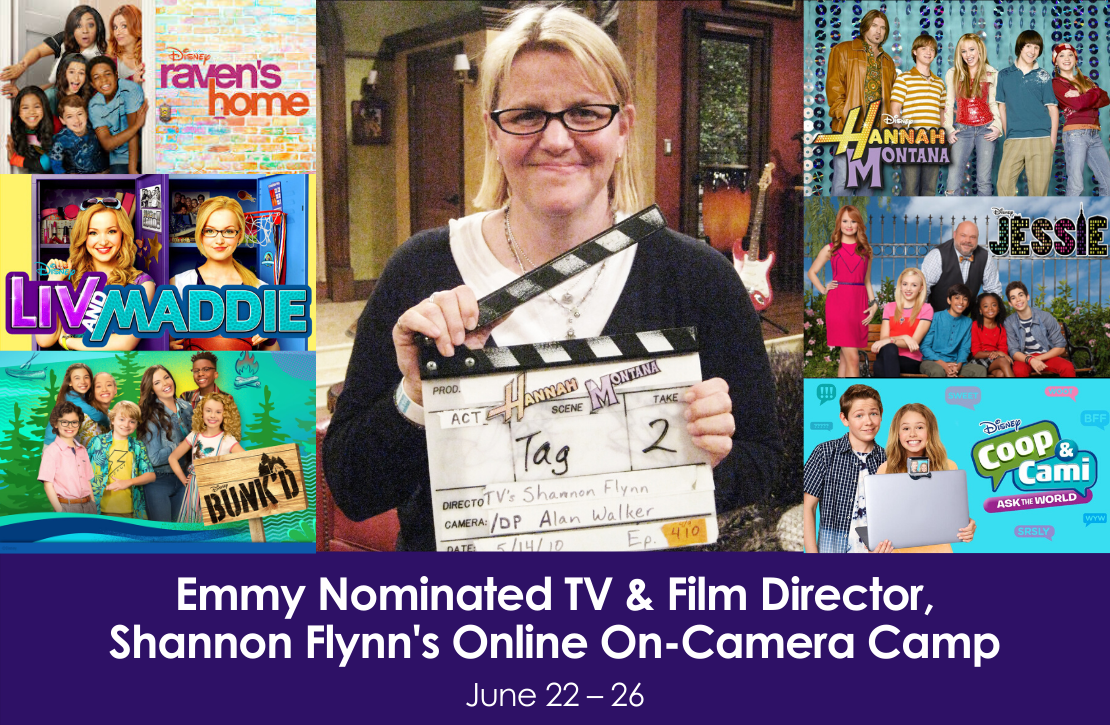 Shannon Flynn is BACK!

We will be utilizing the Zoom app for our online camps, just as we have been doing with our online classes since early March! Exciting Zoom features like break-out rooms make it possible for campers to work opposite one another! Playback is a huge part of our On-Camera camps, and we’ll be utilizing Zoom’s recording function to record the scenes so campers can review their performances each night before we discuss it together as a group the following day.

Even though we cannot be in person, we have found that our campers still learn a ton about the art of on-camera acting, make new friends, and have a sense of community that is really important during this unprecedented time!

Live out your dreams of starring on a hit TV series with Emmy Nominated TV/Film Director, Shannon Flynn! Shannon is an Emmy-award nominated multi-platform film, television and digital director. She has worked on both single and multi-cam shows for a wide variety of networks, including APPLE TV+, NETFLIX, HBO/HBO MAX, DISNEY CHANNEL and NICKELODEON.

Shannon received her MFA in Directing from the Yale School of Drama.

All of the scenes used for this class will be pulled from actual TV shows Shannon has directed!

The week kicks off with a head-first dive into what really defines a sitcom.  Campers will gain a clear understanding of the format, style and schedule. They will then learn the crucial process of how to dissect a comedy script and prepare for a role.  The day ends with each camper’s big audition!

A first-hand simulation of what the first day on a sitcom entails.  Campers will participate in a professional Table Read to learn the importance of this event as well as the Network notes that always follow.  They will then undergo a brief Production Meeting for their scenes to see the bigger picture of how decisions are made that can affect the material.  Their day ends with a rough initial ‘on-stage’ run-thru where we put the scenes on their feet.

An intensive on physicality and performance for everyone’s scenes. Campers will get firsthand insight into how much detail goes into every beat and every decision on set.  They will learn about the rewrite process as well as the value of the Producer and Network Run-Thru.

Campers will get familiar with the various crew positions that help bring a show together and that directly affect their experience on set.  They will then perform their scenes and receive feedback on various takes. We’ll focus on physicality on-camera (what are your character’s unique mannerisms, how do they hold their body, etc) and discover together how your physicality can inform your performance.

Family and friends will zoom in for their final performance! They will learn the precision involved in putting on a live show, and gain a full understanding of why the rehearsal week is so vital.  The day will end with a Q&A for parents & campers with Shannon and ACANY Artistic Director, Jessica R. Grosman.

Each Day- Workshops with Guest Instructors

In addition to working on their scenes with Shannon, campers will take daily specialized workshops with Shannon and other special guest instructors!

• Improvisation for the Camera with a pro from the Improv World

• Dialect Coaching with a Dialect and Speech Pro! Learn how to speak in a British, New York and Southern accent
• Voice-Over Acting for Animated Shows and Films! Learn how to create bold animated characters for cartoons