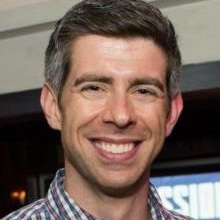 Pat Goodwin joined Telsey + Company in 2006 after graduating summa cum laude from Drew University with a double major in Theatre Arts and Political Science. He is a guest faculty member at NYU, Columbia, and Wagner as well as other organizations dedicated to theatre education for children, teenagers, and college students with a focus on audition technique. The team at Telsey + Company’s Broadway casting credits include The Cher Show, Pretty Woman: The Musical, Network, Be More Chill, American Son, Beetlejuice, Torch Song, Oklahoma!, Gary: A Sequel to Titus Andronicus, Something Rotten, The King and I, Finding Neverland, An American in Paris, Kinky Boots, If/Then, Newsies, The Bridges of Madison County, Annie, Godspell, Evita, Bonnie and Clyde, Chinglish, Baby It’s You, Catch Me If You Can, Sister Act, Priscilla: Queen of the Desert, The Normal Heart, Memphis, Spider-Man: Turn Off the Dark, Million Dollar Quartet, Elf, The Addams Family, 9-to-5, A Life in the Theatre, Reasons to be Pretty, Blithe Spirit, Next to Normal, Rock of Ages, Rent, Wicked, In the Heights, South Pacific, Hairspray, Legally Blonde, Company, November, Grey Gardens, The Color Purple, The Rocky Horror Show, All Shook Up, Tarzan, and Sweeney. Film credits include The Odd Life of Timothy Green, Friends with Kids, Jonah Hex, I Love You Philip Morris, The Other Woman, Margin Call, Mainstreet, Howl, Rachel Getting Married, Sex and the City: The Movie, Sex and the City 2, Across the Universe, Dan in Real Life, Pieces of April, Rent, and many more. Telsey + Company is also responsible for casting several national tours, off-Broadway productions, regional theatre productions, commercials, and television projects, including Smash for NBC and A Gifted Man for CBS. Patrick is a proud member of the Casting Society of America.