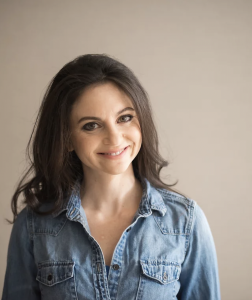 Danielle Pretsfelder Demchick, CSA (she/her/hers) is an advocate manifesting change in how the real world is reflected in today’s media.  She has been an active member of the New York casting community since 2004. NICKELODEON was her casting home for over 14 years, where she tapped into her love of developing young talent. From live action and animation, scripted and unscripted, long form and short form, and even podcasts, she has and loves to cast it all! Some highlights from her Nickelodeon years include The Astronauts, The Barbarian and the Troll, Blue’s Clues & You, Bubble Guppies, Dora the Explorer, Drama Club, Wallykazam, and Welcome to the Wayne.Prior to Nickelodeon, she worked in independent film casting. Select credits include Adam (2009), Holly Rollers (2010), New York City Serenade (2007) and Where God Left His Shoes (2007.)She also spent a year at Innovative Artists learning the agency side of the business, learning from the absolute best of the best.Since her departure from Nickelodeon to open her own casting office in April 2022, she has cast American Girl: Corinne Tan, the first American Girl of the Year film, which tells the story of the first Chinese American Girl, for HBOMax and Marvista Entertainment, an episode of Last Week Tonight with John Oliver and worked as the kids casting director/consultant on several films including You Are So Not Invited to My Bat Mitzvah for Happy Madison Productions.  She is currently casting an unscripted girl group for Republic Records and JYP Entertainment and continues to cast Viacom Kids & Family content, including a collaboration with Alvin Ailey that she is especially excited about. She has several independent films and consulting projects she can’t wait to share more about!The co-VP of Advocacy for the Casting Society of America, her work elevating underrepresented communities has been barrier breaking. She has led open calls for Trans & Non-Binary Actors, Performers with Disabilities, MENASA (Middle Eastern, North African, South Asian), Veterans, Senior Actors, Native American and Indigenous Actors, Black Actors, and most recently, a global open call for Asian Actors (over 7,000 actors submitted.)
PreviousLisa CalliNextScott Wojcik