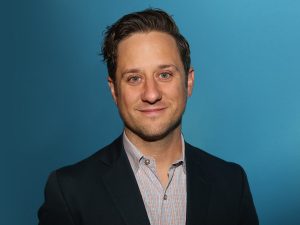 Newly in 2020 Christopher began a run on Broadway in the Stephen Sondheim/George Furth musical Company. It was directed by Marianne Elliott and it’s hoping to return as soon as Broadway reopens. Christopher most recently starred as Ogie (“Mr. Fitzgerald quite simply knocks [it] out of the ballpark.”—Charles Isherwood, The New York Times) in the sold-out Broadway run of Waitress at the Brooks Atkinson Theater, for which he was nominated for a 2016 Tony Award and won the Drama Desk Award and Outer Critics Circle Award for Best Featured Actor.

Also, most recently, Christopher finished shooting season 2 of the hit Syfy/NBCUniversal series HAPPY!  He returns, in the series regular role of the enigmatic Sonny Shine, opposite Chris Meloni and Patton Oswalt.

In Film and TV, 2018/19 proved to be busy years that culminated in the December premiere of season 1 of the Syfy/NBCUniversal series HAPPY! Earlier in the year was the fall premiere of the Emmy nominated Netflix series GODLESS, in which Christopher co-stars with Merritt Weber and Jeff Daniels, followed by a recurring role in season 2 of the Emmy nominated Amazon series THE MARVELOUS MRS. MAISEL. Additionally, he guest starred on NBC’s BLINDSPOT.

In film, Christopher is in the upcoming LET THEM ALL TALK for HBO Max. He co-stars opposite Dianne Wiest and it’s directed by Steven Soderbergh.

A veteran of the stage with over 10 Broadway credits to his name, highlights include his Tony award nominated performances for starring roles in THE NEW MEL BROOKS MUSICAL: YOUNG FRANKENSTEIN (Drama Desk and Outer Critics Circle nominations) and FINIAN’S RAINBOW (Outer Critics Circle nomination; Drama Desk Award winner for best featured actor in a musical). Other credits include, originating the role of Boq in WICKED, AMOUR (Drama Desk nomination), Launcelot Gobbo opposite Al Pacino in THE MERCHANT OF VENICE, AN ACT OF GOD opposite Jim Parsons, and he also became the first actor to star as both Billy Flynn and Amos Hart in the long-running Broadway production of CHICAGO.

Christopher received a bachelor’s degree from Rollins College and an MFA from The American Conservatory Theater in San Francisco. Christopher resides in Brooklyn, New York with his wife Jessica Stone and two sons.