On-camera workshops give students the unique opportunity to work on scenes and audition sides from television shows, films, and commercials. Each workshop focuses on the different acting techniques needed to excel in that particular art form. Workshops are taught by prominent industry pros including NYC and L.A. Casting Directors, L.A. TV/Film Directors, On-Camera Actors, and Scouting Talent Representatives.

SESSION 2 SOLD OUT! REGISTER FOR SESSION 1

Take 1 or more sessions with Wendy from the comfort of your own home!

Learn the art of comedic on-camera acting featured on both The Disney Channel and Nickelodeon TV from one of the industry’s most in-demand professionals, Wendy Faraone! Wendy is a dynamic and influential director. She is currently directing Disney’s SYDNEY TO THE MAX, RAVEN’S HOME, JUST ROLL WITH IT, BUNK’D, COOP AND CAMI ASK THE WORLD, and she directed WALK THE PRANK, KNIGHT SQUAD, among others! She was also the director of Disney’s #1 family sitcom, LIV AND MADDIE.

Wendy’s workshops are well known for creating an inviting and energetic environment in which students are given the tools necessary to be successful, working actors in the entertainment industry. Impressively, she has recently coached all of the newly scouted talent for Disney Channel’s latest boot camp and showcase!

Focus of Class:
• Learn what it takes to be a successful actor on the set of a Disney and Nick show
• Rehearse Scenes from Hit Shows Wendy has directed
• Receive Coaching and Feedback directly from Wendy Faraone
• Learn how to Land Jokes, Make Turns and Bring out the Funny in the Audition Room and On Set
• Showbiz Q&A with Wendy and Artistic Director of A Class Act NY, Jessica R. Grosman


LEARN MORE or REGISTER FOR SESSION 1

Looking for an Agent? A Manager? Both? We’re here to offer you the exclusive opportunity to perform for 10 scouting agents and managers in one evening, from the comfort of your home using the ZOOM app!

FREE BONUS: For singers, we will create a track for you to sing with during the showcase!

A Class Act NY has been helping aspiring actors meet their representation and start successful careers for years. Don’t believe us? Check out our impressive Student Achievement Page!

Talent reps will watch your performance LIVE via Zoom, and give individual feedback and coaching!

Need some extra help before the big day? Participants will receive a special rate on Skype coaching with our Broadway coaches and professional vocal coaches!!

Contact the office to set up a coaching session!

Learn the art of comedic on-camera acting from TV Star & Director, Benjamin King! Benjamin is best known for playing the role of Pete Rooney on Disney’s #1 Family Sitcom, LIV & MADDIE. Other notable credits include starring in David E. Kelley’s series THE WEDDING BELLS, and guest appearances on many popular TV shows including: BETTER THINGS, GREY’S ANATOMY, WEEDS, MIKE & MOLLY, NCIS, BETTER OFF TED, PSYCH, CSI: CRIME SCENE INVESTIGATION, CSI: MIAMI, SCRUBS, THE KING OF QUEENS, WHAT I LIKE ABOUT YOU and more!

While starring on LIV & MADDIE, he also directed some episodes!

Focus of Class:
• Learn what it takes to be a successful actor on the set of a sitcom
• Rehearse scenes from hit Disney & Nick shows
• Receive coaching and feedback from TV Star & Director, Benjamin King
• Learn how to Land Jokes, Make Turns and Bring Out the Funny in the Audition Room and On Set

Materials will be distributed via email prior to the workshop, and students will be expected to have them accessible during the class.

A reader will be hired to work opposite each student!

Parents of child actors and actors of any age are welcome to join our Artistic Director, Jessica R. Grosman and Mallory Levy, Director of the NY Youth Division (legit - theatre, film, tv and commercials) at DDO for a most informative Show Business Q&A!

Mallory is one of the most respected agents in the biz! Mallory has had clients on Broadway, in National Tours, and on popular TV shows! She is a wealth of information!

Before founding A Class Act NY, Jessica worked at two premiere talent and in casting in both NYC and CA! As the artistic director of ACANY, Jessica works closely with bicoastal casting directors, agents and managers.

Receive one-on-one coaching from the comfort of your own home from Artistic Director, Jessica R. Grosman. Before founding A Class Act NY in 2005, Jessica worked in commercial casting in both NYC and CA!

In this 2 hour workshop, you will learn the art of commercial acting and audition technique!

Learn how to analyze commercial copy and find the acting beats within the copy to make a lasting impression in the audition room and on advertising execs!

Focus of Class:
• How to analyze and break down commercial copy to find the selling points within the text
• Learn how to nail your slate
• Learn how to sell a product without being too over the top
• Proper commercial acting and audition technique
• Learn lingo that is specific to commercial auditions and on-camera acting
• Q&A for parents and students (time permitting) 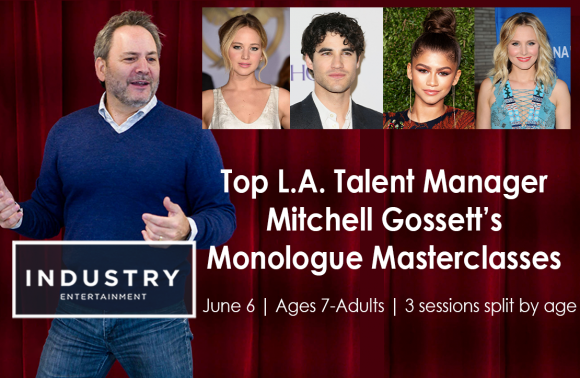 Work with powerhouse L.A. Talent Manager Mitchell Gossett of Industry Entertainment Partners in a monologue masterclass! Mitchell's storied success has allowed him to refer talent to agencies in NY, LA and across the USA.

Mitchell believes the most exciting way to explore material is not through thoughts alone, but through “ACTIONS” – through what you are DOING with your body. Bring ACTions into the work creates a stronger, more visceral connection to the material. But as importantly, it also provides a means of showing the most unique feature any actor can present: THEMSELVES in the work. Students will receive monologues in advance of class and Mitchell will offer direction and coaching to lucky participants!

Mitchell has repped and developed many noteworthy actors, including Jennifer Lawrence, Darren Criss, Miley Cyrus, Zendaya, Lucy Hale, Selena Gomez and many, many others. 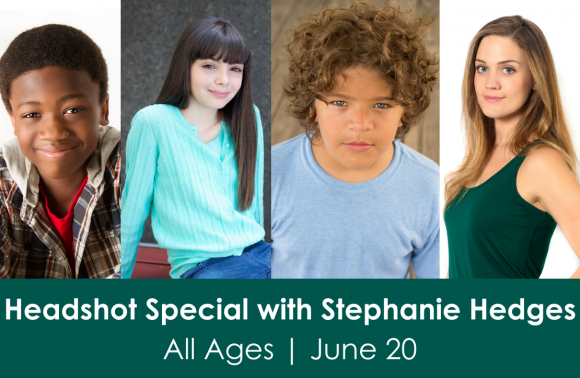 Booking for this special discount is only available through A Class Act NY registration! 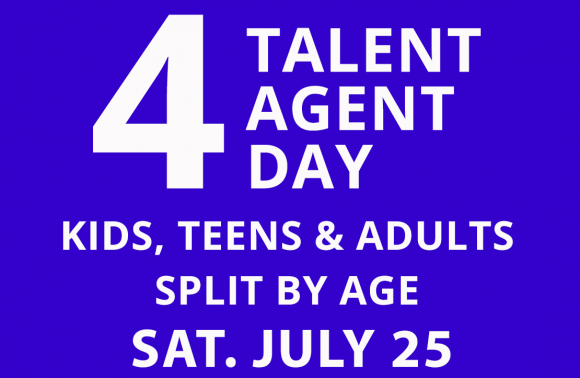 Lucky participants have the amazing opportunity to work with either 2 or 4 Top Scouting Talent Agents in either a 1/2 day workshop or a full day 6.5 hour workshop!

3 Hour AM Workshop - Film & TV with 2 Top Agents
• Mock television and film auditions
• The Agents will offer guidance, feedback and coaching on both individual and chemistry read mock auditions (scenes will be sent a few days in advance as they would in a real audition scenario)

3 Hour PM Workshop - Musical Theatre OR Monologue Performance with 2 Top Agents
• Perform either a 16-bar cut or a one-minute monologue. A music director will be provided for singers. Pre-approved monologues will be sent in advance for non-singers.
• Actors will receive one-on-one coaching on their presentation, interpretation and audition technique.

Learn how to snag an Agent and how to nail auditions!

Register for Both Sessions and SAVE! 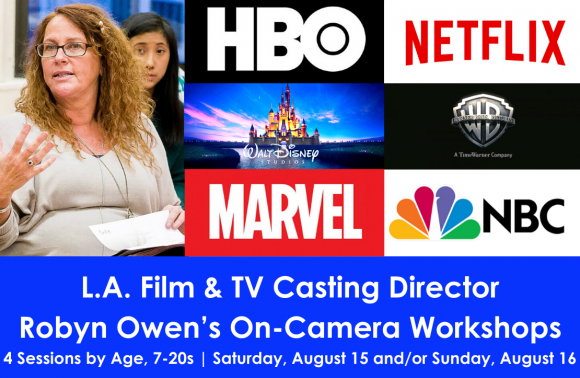 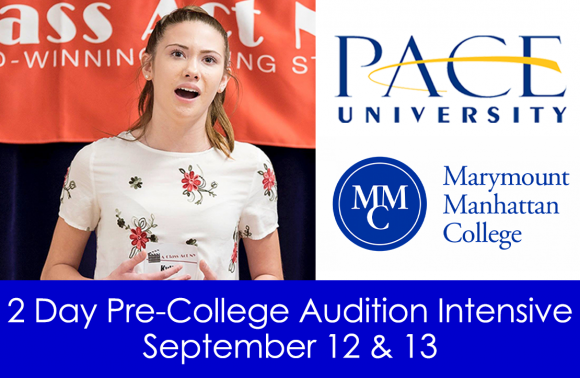 Do you need guidance on the college admissions process like, how do I go about choosing the right material that showcases me, my vocal range and my unique personality? How do I create a professional and memorable pre-screen video? Do you want to know what college admissions officers are looking for?

If you have answered yes to any of these questions, ACANY’s 2 Day Pre-College Audition Intensive is for YOU!

Work all weekend alongside college admissions officers Wayne Petro, Associate Director of Enrollment for the School of Performing Arts at Pace University, and Kevin Kemler, Director of Fine and Performing Arts Admissions at Marymount Manhattan College, to prepare for the showcase with more admissions officers Sunday! This 2-Day College Prep Intensive will leave you confident and ready to take on the daunting task of applying to college musical theatre programs!