AUDITIONS for the World Premiere of an ORIGINAL MUSICAL! 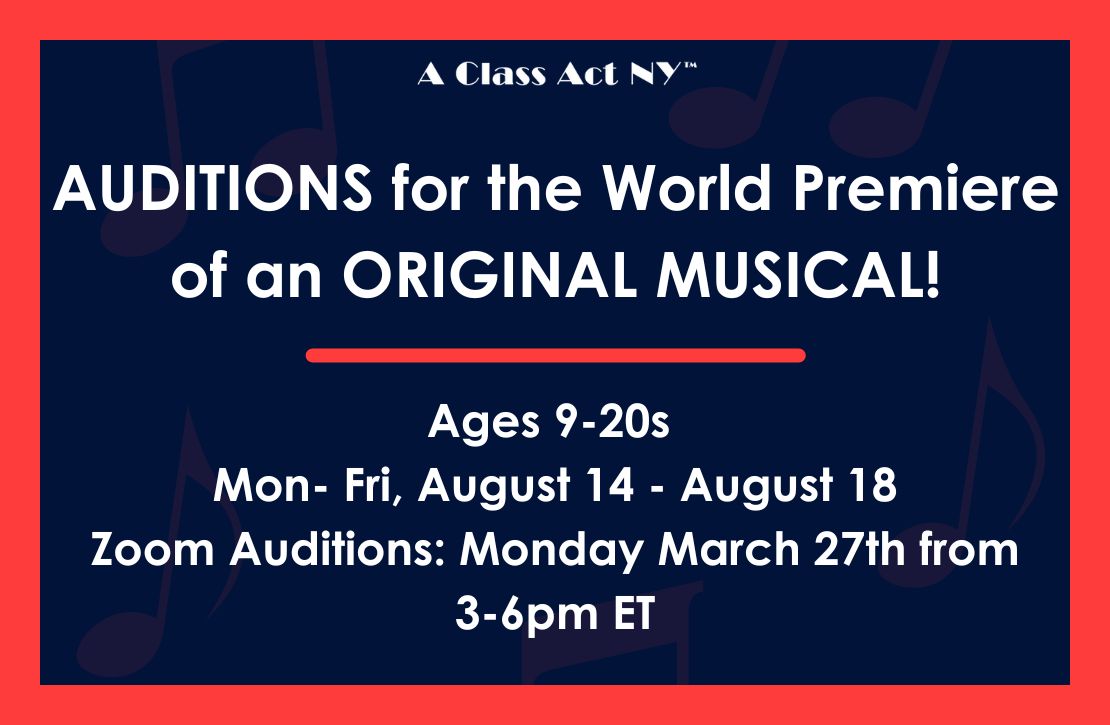 AUDITIONS for the World Premiere of an ORIGINAL MUSICAL!

Be in the WORLD PREMIERE of a new work written by EMMY Winning Composer and Lyricist, Sean P. Pallatroni!

Sean will be serving as our music director for the week as well! Director TBA soon!

Auditions will be held over Zoom on Monday, March 27th!

Learn about the rewards and challenges of creating a character from the ground up, and working with a developing script.

Throughout this 5-day program, students rehearse a brand new musical and get it on its feet!

Staged Reading in the Studio:

The week culminates in the WORLD PREMIERE for an audience filled with family, friends, and industry guests!

This is the 7th Original work produced by A Class Act NY! Past Productions Include: WRITTEN IN TIME by Sean Pallatroni, FOUND. by Lauren “Coco” Cohn and Stacia Fernandez, MAJOR & MINOR ADJUSTMENTS (IN THE KEY OF QUARANTINE) and THE ROAD TO SOC-CON by Sean Pallatroni, ESCAPE! by Matt Patrick Walsh, and PSYKIDZ by Bobby Cronin! All of these works are still being developed today!

Sean P. Pallatroni is an EMMY® Award winning composer, songwriter, director and pianist. Originally from Bedford NH, he studied performing arts at the Derryfield School under the direction of Laurel Devino, and completed his undergraduate degree in Music Composition at the Hartt School of Music Dance Theatre (University of Hartford, West Hartford CT).

Sean has scored programs for Connecticut Public Television, including the shows “Empowering Connecticut,” “Infinity Hall Live,” and “All Things Connecticut.”. He has also worked on the short film “Twenty Minutes” and various commercial and multimedia scoring projects. Sean is the recipient of Hartt’s “Edward Diamente Award for Distinguished Undergraduate Composition,” and winner of the 2010 Alabama Orchestra Association’s Composition Competition for his work “When the Grass Was Still Green.”